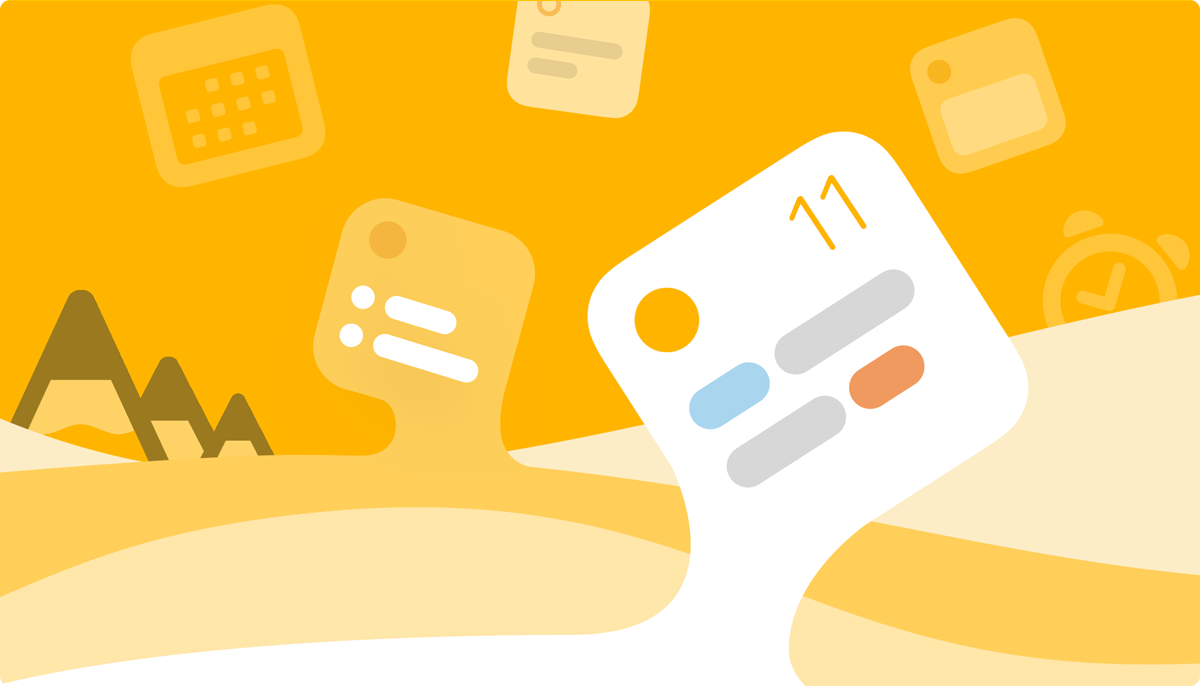 Turning it to eleven…

Wow, that was the end of some ride to bring you the biggest Agenda update to date. And no, I’m not just talking about the surprise at the end, in fact it started right after we shipped version 10 back in May. “The Plan™” was to do a relatively small next update as we had taken since the start of the year to bring you the sharing extension, requiring a lot of under-the-hood changes. Besides a few bug fixes, we “just” wanted to add the improved layout for iPhone that would turn this into this:

Agenda version 11 (right) brings a much improved layout for iPhone compared to previous versions (left), showing the entire title over multiple lines if needed and the date no longer eating into the title area.
Note: On iPhone the gear menu has been folded into the orange dot next to the title in order to save vertical space.

Of course that was the plan, but it quickly grew into a much much larger update where the overarching theme was to bring a number of improvements that we wanted to do for a long time, some since day one. Like making Agenda much more accessible by adding great support for VoiceOver and VoiceControl: 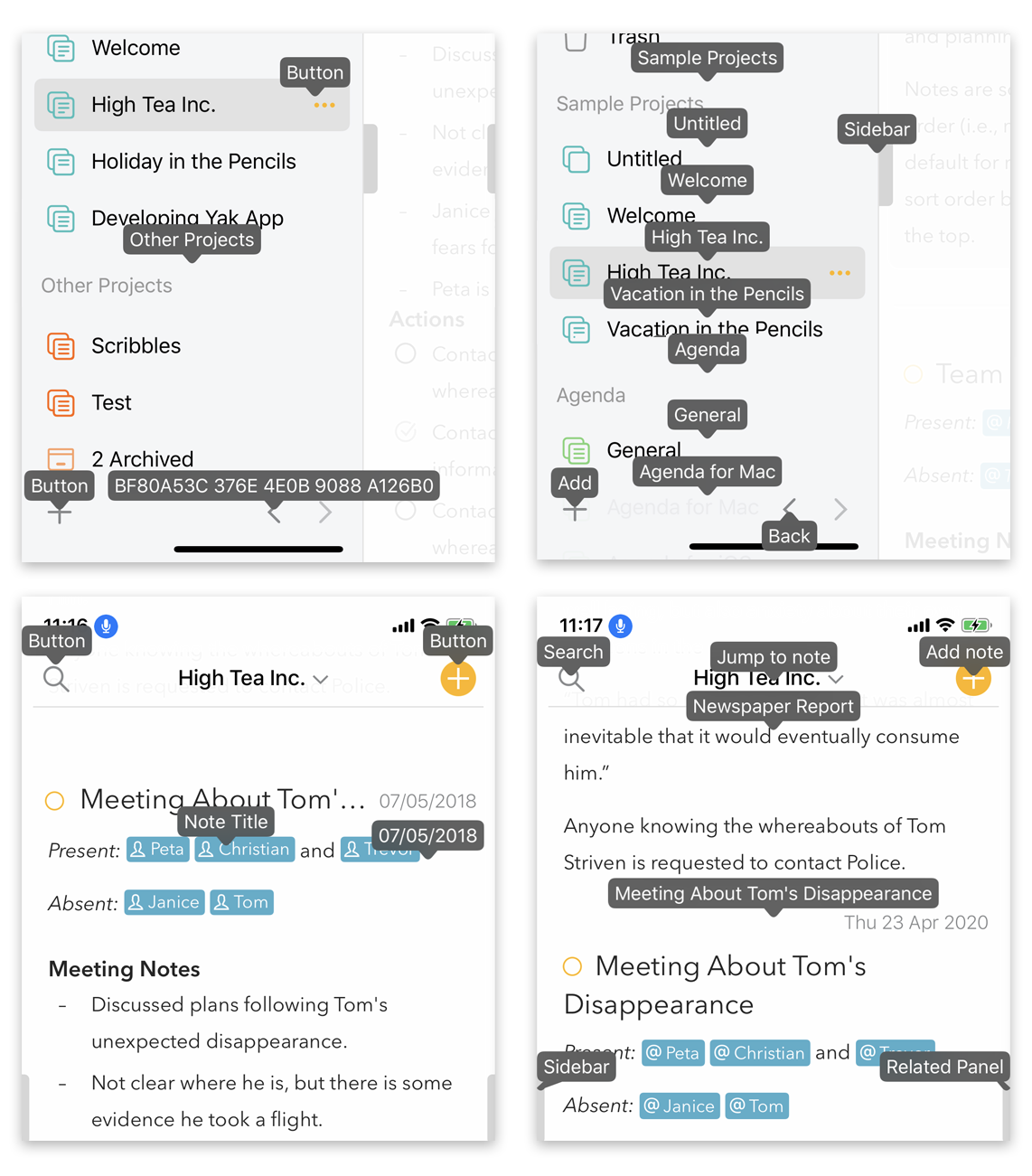 Agenda version 11 (right) now works great with VoiceControl and VoiceOver, a day and night difference over previous versions (left) where many buttons were unlabelled and the app was hard to navigate

When we talk about accessibility, we also refer to expanding the range of languages Agenda supports, making it more accessible to those who don’t speak English or prefer to use Agenda in their own language.

Russian, bringing the total to 14 (!) supported languages. This is all thanks to the amazing team of more than a 100 volunteers who continue to blow us away with their dedication and speed, it’s been really rewarding and fun to work with you!

We hope to add many more languages in future updates (did we say we’d love to see Japanese and Korean translators join the group for example?).

One of the areas we spend a lot of time on is performance, as Agenda grows, so do the number of notes people add. Keeping things fast and fluid isn’t always easy as more and more projects and notes are entered. We spent a lot of time looking at all the places where we could make things faster, and we’re really happy to say that you should notice a pretty massive improvement in performance. Especially when switching between and scrolling through projects the difference should be night and day!

There are many ways you can use Agenda, not enforcing a single way has been a deliberate choice as it allows you to develop your own workflow that fits your way of working best. This is perhaps best demonstrated by the popularity of the ways you can automate Agenda, from the markdown syntax to style text, to the new templates feature we introduced in the previous update, to full blown automation workflows using Shortcuts and x-callback-urls.

This update is taking also this aspect to 11 with the introduction of actions. For example, simply type \now and the current date and time will be inserted in the text of your note. You can also use actions in templates, which become even more powerful this way.

We also added a number of new x-callback-urls for creating categories, changing the status or collapsed state of notes, and last but not least, combining callbacks with template and actions; you can now create new notes from a template using x-callback-urls, even passing in arbitrary text that gets inserted in the template at the place where it contains the \shared-content action 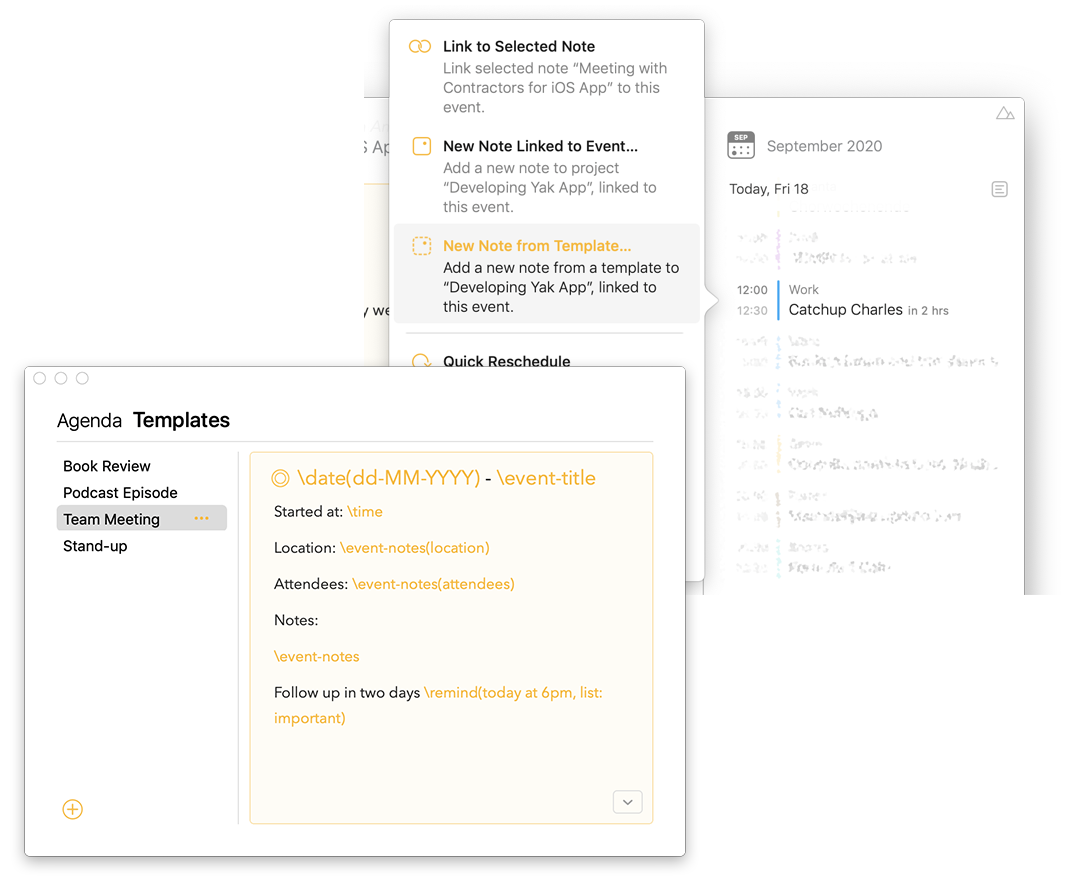 Combining the power of actions with templates in Agenda version 11, for even more powerful workflows.

The New and Shiny

Back to the beginning, so what was all the stress about? Every year Apple announces the new features of their major iOS and macOS releases in June at their Worldwide Developer Conference, which then leaves us smack in the middle of the summer holidays to bring you all the new and shiny in time for September.

The problem, our 10.1 update had grown into our biggest update so far and wasn’t done yet. Fortunately we are with a two-man team, so half the company jumped on Scribble and Widgets, and the other half on wrapping up the version 11 update

The two ends came together again just in time to bring you one giant update, including support for the new Scribble feature that allows you handwrite your notes and convert them into typed text, and the new Agenda Upcoming widget that allows you to put your most relevant notes right on the home screen. 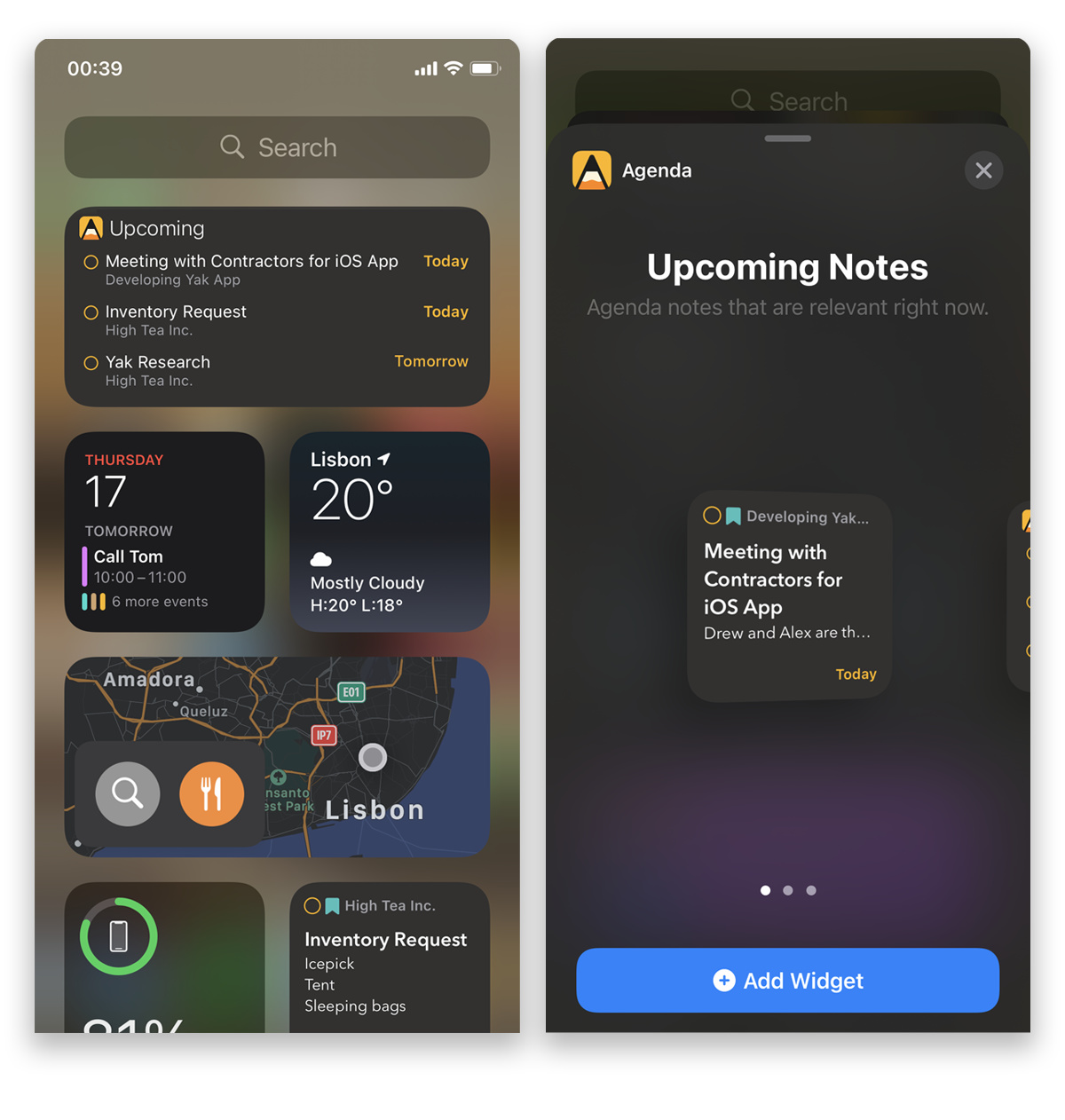 New on iOS14, the Agenda widget provides a quick glimpse of your most relevant notes right on the Home Screen, and they are all only one tap away.

Interestingly, it seems a lot of the design in Agenda has inspired the folks at Apple as they gave macOS11 a big UI overhaul, which fortunately means we had very little work on that end, pfew. It means that if Apple pulls another “available tomorrow”, we’re ready

I hope by now you get a feel of how excited we are bringing you version 11. We could go on and on but it’s probably better to stop here and point you to the full release notes if you’d like to know about everything else that is new, like support for the Magic Keyboard on iPadOS, and the redesigned gutter menu on macOS.

Enjoy Agenda version 11 and let us know what you think!
Alex & Drew

I want to add it is an impressive list of “free” features. I’m pleasantly surprised that more of those weren’t premium. Buy in folks. Agenda has a great pricing model. Support them.

Thank you so much for your super kind words, I don’t think we could have asked for a better example of what we tried to achieve when we thought of the cash cow model!

You are right, also this update has many more free new features than premium features, but interestingly it’s not something we ponder a lot about. Both @drewmccormack and I are using Agenda ourselves every minute of the day and it makes that we just want these features ourselves, whether someone pays for them or not. Of course, we do need “something” to keep the light on, but our primary goal is to make all users be equally excited and pleasantly surprised with the feeling that Christmas came early again. And even more so, in these crazy times!