Just wondering if this feature has moved up in the priority list or if there is an ETA already?

Short answer, yes, it has, longer answer is that while it has moved up it’s probably still another 2-3 major updates away.

So I’ve come back to re-try Agenda – after having dropped it about a year or year-and-a-half ago.

I’m disappointed this kind of functionality still hasn’t been added. It was (and remains) the one highest priority for me. I need a way to manage my unfinished tasks.

What’s the point of having “checklist” items if there is no way to find unfinished items?

I’ll likely be dropping Agenda again and going back to my alternatives. A shame, Agenda is promising but – very sad to see that 2 or 3 years after proposing ideas similar to this one there is still no progress.

There are no shortage of ideas. That’s not the problem. The problem is that everyone has a different one.

We like this idea, and we are certainly planning to address it. But we want to do it properly, and it will be part of a mayor overhaul of the search. It’s high on our list in the roadmap now.

People use checklists in very different ways. I use them extensively, but they are rarely completed fully. Showing unchecked items for me would be a total waste of time. I use them more as lists to work through, and not as individual items which must all be completed before I can continue.

The good news is that we will be adding a very flexible and powerful way to see unchecked items, and create overviews for them, for those who want this functionality. It’s a major project, but we are much closer to starting it.

this exact todo list view would be cool to see as a toggle at the top between notes mode and task mode. this way the work flow can focus in on a task before going back to the notes view which can be overwhelming to see once deciding to work on a task.

see the images here from another app called zones by 11labs. they have a toggle that says tasks or ideas(which is their notes without your awesome functions) 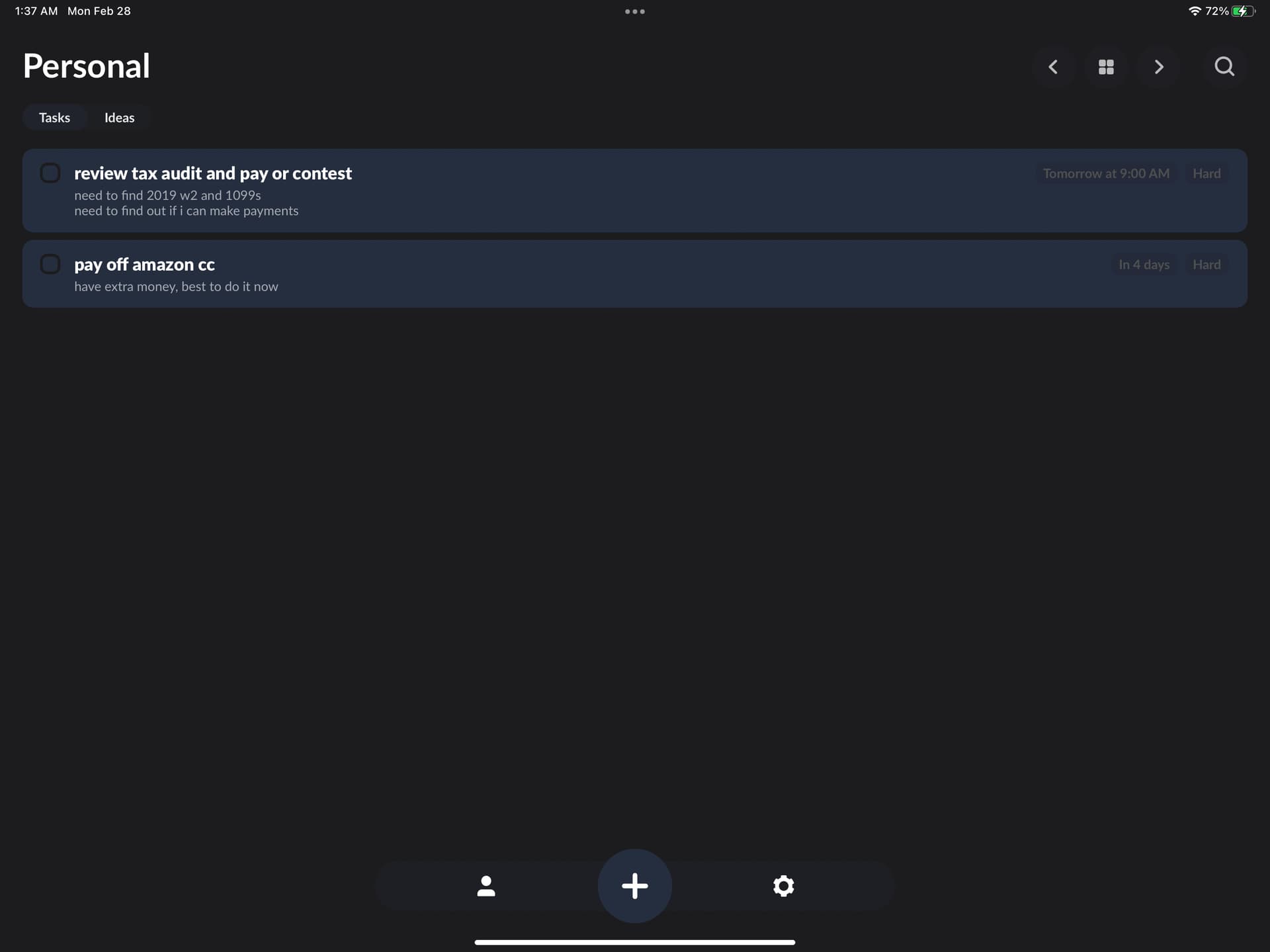 it would replace all together for me if i could toggle between the notes feed which is the Agenda app signature, into the todos view just to hide the notes feed for a second so i can visually commit to one task which is whats hard for me to do when using Agenda. with so much going on at all time.

I love the notes feed, but it can even be hard to focus on one note in particular because theres no option to see just that note and note the whole feed.

so i get discouraged and overwhelmed no matter how much i want to stay in your beautiful app. i especially love the integrated calendar too.

We have ideas about improving filtering and presentation of notes that should help with this. The idea would be to just show task items, that sort of thing. Would be part of a large search/filter update we are planning.

ohhhh man, thats exciting! Love it and again - thank you for all you do. I saw the CrushApps that were built in the past to understand the level of design and functionality you put into this from the Ikuru days. Its amazing work.

Some kind of Overview with open todos would be very welcome. For now, I’m trying hacking one by adding a tag (@-) at the end of each todo so it shows up in a saved overview I can add to the sidebar. It’s hacky but works.

Not that hacky. That is exactly how I would suggest doing it at this point in time. Adding a tag like #incomplete to items, together with an Overview, is a good way to not let any important ones slip through.

By “hacky” I mean it’s a workaround for a feature that doesn’t yet exist. It’s quite a bit of manual work to add the tag and then later to remove it when the checklist item is checked off and closed.

Would be very useful to have this feature. I’ve always found that with Apple notes checklists would become lost in all the notes which kinda defeats the purpose of a checklist. Agenda has everything I need for meeting notes but I will still need to use another app to quickly track my todo items.

I have different types of checklists in my work. I have one main checklist, which is like a daily task type thing. I use this a bit like you might use reminders or other task lists. I put things in there, and I make sure they are done.

But I also have other ones, like on programming projects. These can get really long. I have no expectation I will work off every single point. Sometimes I abandon them, or simply don’t get to them. Having these clutter my important stuff wouldn’t be useful.

In other words, even before we have a feature for showing unchecked items globally, I think you can keep focus on the really essential stuff using on-the-agenda and things like that. That is how I use it.