Hi - I’m seeing a wierd layout issue, where a project tag is showing up at the top of other views, and overlapping with text that should be there.

Example 1: In another project section.

In the screenshot below I’m looking at the project Business development > Cooki Control. Behind the title of the first note in this project you can see Clients > Haylee, which is a different project.

Example 2: In the Today view.

The first note in this seciton belongs to Clients > Alchemy, but behind that text you can see Clients > Haylee is still there.

This is the App store version but I had the same issue with the beta that I was running before.

Is this me? Any tips to fix?

Very weird, we had 2 more people report this and even got a library but it proves very hard to reproduce. I did make some changes in tomorrow’s 2.1 update that might resolve the issue, would be great if once out you could give the beta a try and let us know if it is indeed fixed.

A quick update We’ve just released the 2.1 update in beta in which we made some changes that might resolve the issue. Could you let us know if it does indeed?

It’s still happening. But I can see why it’s hard to reproduce because it’s not consistent. I also wonder if sometimes it happens and people don’t see it, because it’s not always at the top. If the rogue text is below the fold, you wouldn’t necessarily spot it.

I’ve tried to reproduce this over and over and I haven’t found a consistent set of steps yet. What I have noted is that the position of the rogue text is related to where that text was when it was used in the On the Agenda view.

It’s like a div that, once displayed, is never hidden. It’s always an On the agenda div, and it doesn’t always happen.

I suspect it might be to do with longer notes, so that’s what I’ve been trying. It also seems to be more likely when I add something to the agenda in session, and then remove it later, without quitting in between. But I’m not certain. All I can tell is, it’s something to do with elements of the agenda view persisting in other views. Quitting the app clears it.

I need to do some actual work now (!), but will come back to this as there must be a pattern to why some notes trigger it and some don’t.

Thanks for the added detail, this in particular is very interesting:

Sometimes, when that note is removed from On the Agenda, the project tag is not removed from the view. It continues to display through all subsequent views, in exactly the same location it was in On the Agenda.

I think that’s where the clue might be, thanks. If you restart the app, does it then reset the situation?

A few more questions, you mention:

How you normally remove the note from On the Agenda? By clicking the dot or using a keyboard shortcut?

Also, do you happen to click on the Show Project button? Do you use this feature a lot or not at all? Do you perhaps click the Show Project during the animation at which the item is removed from On the Agenda as it dissappears, or perhaps already other actions?

One more, could you perhaps send us try to reproduce it while making a screen recording? That makes it much easier to reproduce the exact conditions or notice small details that might be relevant.

Thanks again for helping track down this bug!

I normally click the dot, because I haven’t learned all the shortcuts yet. Sometimes in the project view, sometimes in the Agenda view. I suspected that clicking in one place rather than the other made a difference but I’m not sure.

When I can work out a reliable sequence to reproduce, I’ll do a screencam of it. I need to be able to reproduce it with any notes, as I don’t want to screenshot client info.

When I can work out a reliable sequence to reproduce, I’ll do a screencam of it. I need to be able to reproduce it with any notes, as I don’t want to screenshot client info.

Perfect and I totally understand of course, thanks!

This is happening to me constantly.

I can reproduce reliably. It happens when I resize (shrink) the width of the window (or open Today Events, which resizes the main screen). Whatever is the bottom heading on the screen seems to get stuck at the bottom of the screen even as things above it move down off the screen as you shrink the window.

If you open the window very wide (so that the main text is centred and not pushed left) then that particular heading stays left justified.
Closing the windown and reopenning does NOT correct.
Restarting Agenda correct the problem.

Hope that helps find the problem (it is super annoying!)

Thanks for that! Would it be possible to email me (alex@agenda.com) a screen recording of what you describe? Both the resize and, after a restart, the open of today events? That would be of great help.

I noticed this happen again today. It didn’t happen yesterday.

There were several rogue tags showing from On the Agenda.

I restarted the app, and it cleared one of the project tags, but not all of them.

The tag it hasn’t cleared belogs to a note that is still on the Agenda.

Could you try the following:

Does the console.app spit out a warning for agenda? And if so, could you copy it and send it to us?

It’s hard to spot what’s a warning. Agenda is pretty chatty in its use of Console!

I’ve got a stuck tag now that hasn’t cleared after a couple of quits, but there’s no obvious warning. I didn’t do any resizes or anything, I just took a note off the agenda and its project tag is now stuck.

I’m afraid this is still happening: 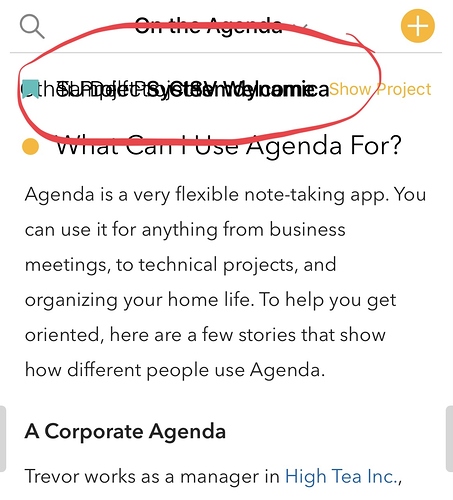 I didn’t manage to re-enact this after restarting the app, but I remember it showed up when I changed the date of this Note in On the Agenda.
I tapped “Today”, after having altered the Date to Today earlier. Then, in the On the Agenda tab, I changed the date back and forth between Today and tomorrow. Each time, the Project title slides to the right, but after returning from the Set Date page tot the On the Agenda overview, it didn’t slide back, which caused the rogue project title.

However, before I restarted the app, I did re-enact the title overlap with one of the Sample Projects, as you can see in the picture. Sadly, I only took one screenshot…

I’ll try to re-enact it some more, but this is all I have for now… hope it helps!

Thanks, it remains difficult to reproduce for us, any clues as to what might trigger this and/or steps to reproduce would help a lot.

this viewing-bug is still active and happening… prettily bugging me, too 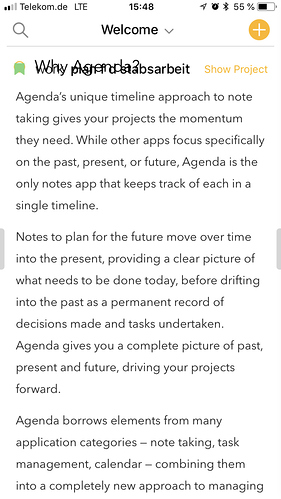 Sorry about this. If you find a way to make it happen consistently, let us know.

You can fix it by quitting the app. Just show the list of apps, and swipe Agenda off the top of the screen to stop it. Then launch again.

Pleased to see I’m not the only person with this problem. I’ve just installed Agenda on a brand new iPad. It’s very annoying.

Sorry, meant to say the suggested solution is working. Thanks as it’s better than having the bug there.