I need to insert images into the text. Is this feature planned for Agenda? And when?

That’s certainly been something we’d like to add but will probably happen in two stages, first by introducing attachments, see also:

Note attachments are something we would like to have, yes. Can’t announce anything, but we are fully aware of the need.

Note also that you can drag files into Agenda, and you get a link to them in Finder. That may be a workaround until we add true attachments.

I want to echo this particular feature, as it is something I use heavily in Bear. And my use case for inline images is a bit different than the general attachment case. The difference is to ensure that the images get rendered as content, rather than a clickable widget that opens the image in a separate app/window like a PDF normally would. Some examples of my use cases:

Right now I use Bear, but I much prefer the organization structure of Agenda. As it is though, the one thing keeping me from switching my workflow over is this one solitary feature.

Also including an example of how I use diagramming, based on a note in Bear I used to think through how I was going to power an Astrophotography rig as part of a solar eclipse trip 50 minutes away from anywhere. 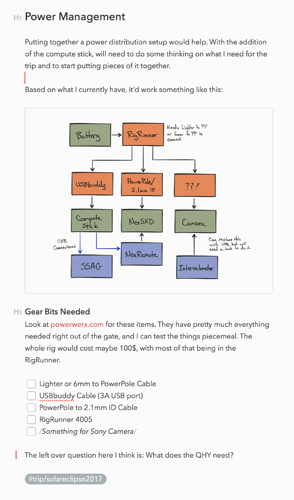 Thanks for the great example!

Additional vote for this one. I also attach photos to my notes. I kinda used it for my lesson plans. Simpler for me. And i could see the pictures already.

+1 to this. I use Office Lens for capturing whiteboards for group discussion. Would love to have that inline in notes.

Inline images are very important for me personally.

I work a lot with concept maps, diagrams and sketches. The missing inline images feature actually renders Agenda unusable for my use case.

Let me second that. Inline images would very much enhance the value of Agenda for my workflow!

I’ll add my voice to this discussion. I simply can’t adopt Agenda until inline images are supported. Love the app, though, and it’s approach to information structure.

Just downloaded the app and had concluded I was making the switch from Bear. That is until I realized I couldn’t drag an image into my notes. I won’t make the switch until this feature is in place. In the meantime, I’ll keep an eye on developments for this app for potential adoption in the future.

+1 for inline images - this is something I use frequently in apps like MacJournal and Apple Notes. Another very important requirement for me.

Another +1 for inline images.

+1 for inline i need this badly

+1 for inline images, as well.