Does everyone have a category called Old Stuff for when some stuff has become less relevant and they start to change the structure, or is it just me?

Probably the thing that I’ve struggled with the most is in-between-sized things – things that are too big to be an item in a checklist, but that don’t warrant their own project. A note is the appropriate size for them. So now I have a project represented by a note, how do I organize those? Do I have a project for those kinds of notes? Or does each note have its own project, but with only one note in it? The former feels cleaner, but I can’t prioritize those kinds of notes relative to “real” projects. The latter I can reorder the projects, but now I have a bunch of projects with one note in them, which seems silly.

I have settled on notes as being the primary unit, which I think makes sense given Agenda’s structure. So each project I work with has a main note – and that note does not live in an Agenda project specific to that project. Instead, the main project notes all live in a small set of Agenda projects, and then when needed I have separate agenda projects for support material.

Here are some pictures illustrating the different approaches:

old: each project gets its own agenda project

I personally don’t like these little one-note projects. To see all the main project notes I have to tag them and create an overview. Most importantly, I can’t reorder these project notes relative to each other. 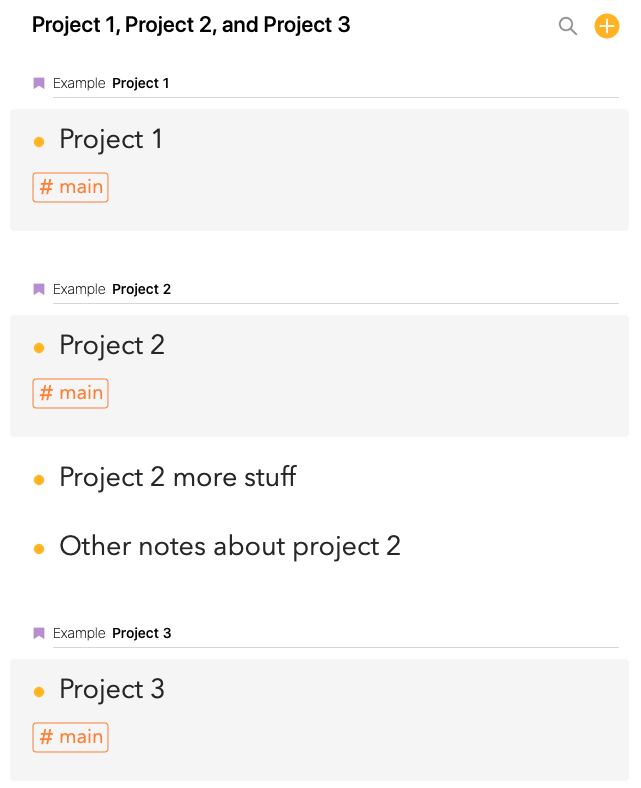 This lets me prioritize small things relative to each other, but ordering is still stuck within a single project. 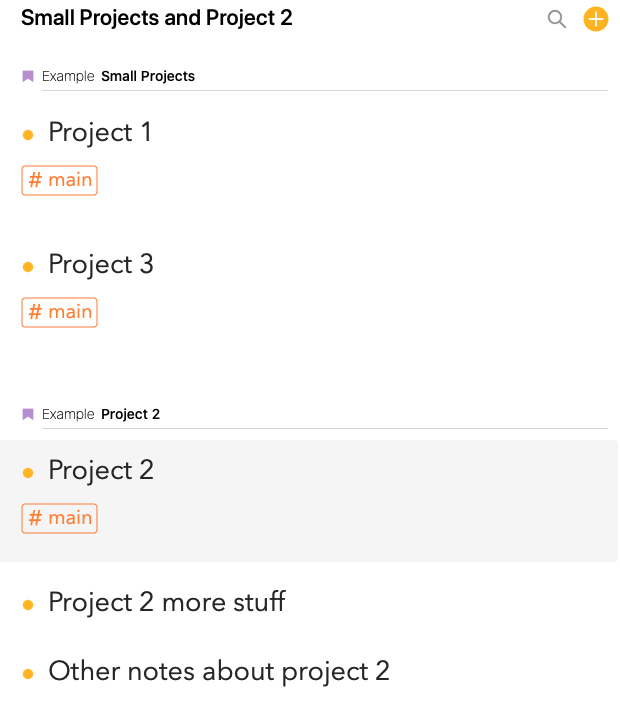 Each project has a note. If it needs more than one note, it gets an agenda project for those notes. The only real downside I see here is that I can’t look in just one place to see everything about a project – the main note lives in one place, and the project support lives in another place. 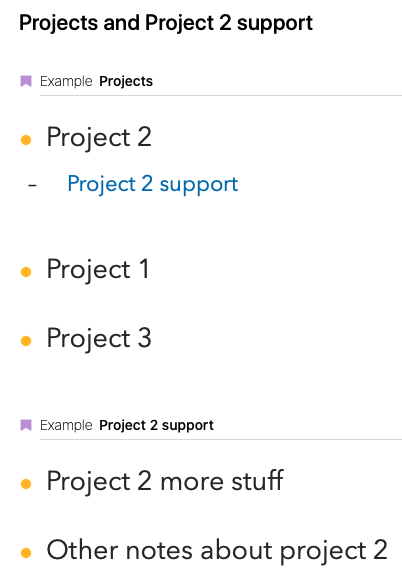 If you’ve made it this far, there’s a possible change that would allow for the best of both worlds: note aliases. A note could live in one project, but have an alias that lives in other projects, so I can order the alias note among my other project notes. It would look something like this: 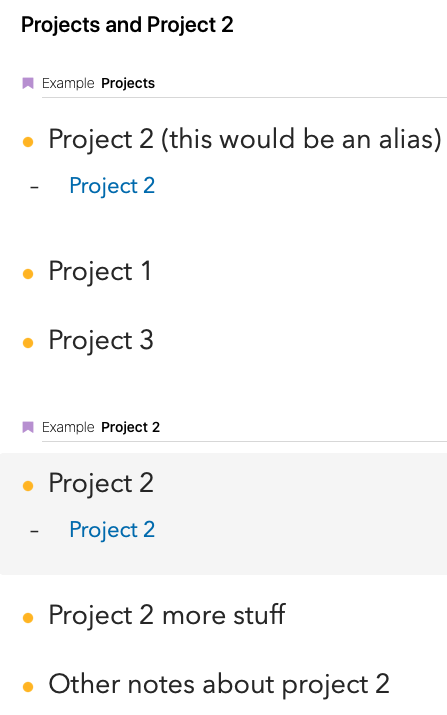 In a way the short answer is that this is what Archived Projects are for. Since I started using Agenda I’ve kind of settled on a stable hierarchy of about 6-7 categories of which 2 are large enough to have a few subcategories. Once projects are done (e.g. each major update of Agenda), I archive those and this way the sidebar in terms of complexity, structure and size pretty much stays stable.

As with everything it takes a bit of tweaking to find the right size and complexity of what works. In general my experience is also that it’s often better to stay light on the number of categories, subcategories and projects than to go too granular. The same is true for tags for example, it’s better to have a limited number of somewhat broader tags, than going to granular as you quickly end up with so many tags that it pretty much becomes useless.

I don’t know if this is helpful, but I have bumbled may well towards a system that is a hybrid of a number of productivity systems. there are two meta areas (which I can’t effectively differentiate in Agenda. One is a ‘working area’ based on Carl Pullein’s Time Sector approach. Projects move around various top level folders depending on the priority for the next couple of weeks (or longer). I don’t differentiate these by areas of interest, although I could (e.g. by using tags).

The second meta area is an Archive area and here old projects are saved by area of interest (e.g Work).

Projects generally start with a single note, giving a purpose for the project and its end state, an area for links to other notes of meetings and phone calls, and a section of tasks which may or may not be sent to Reminders. Where an additional note is merited (a meeting and its outcome e.g.), this is recorded in a discrete note and linked to the master project note. When the project is done it is archived.

I also keep a daily journal and where necessary these entries can be linked to projects.

I see what you mean, you basically have a section the sidebar where the “archived” projects lists, not being really archived using the feature but more living in a specific area of the sidebar, say at the bottom?

But perhaps isn’t a simple solution then to make an “Archive” category below which you move all these (in sub-categories and sub-sub categories if needed, representing the hierarchy that they are currently in. i.e. create an Archive category and move the current categories of your “archive area” in)? You can then just use the general collapse/expand ability of that archive to quickly hide and show all the archived projects, keeping things clean.

Another feature that might be helpful for you is the Recent projects feature, which kind of allows you to toggle between the Working area and all projects simply based on what you have recently worked on: 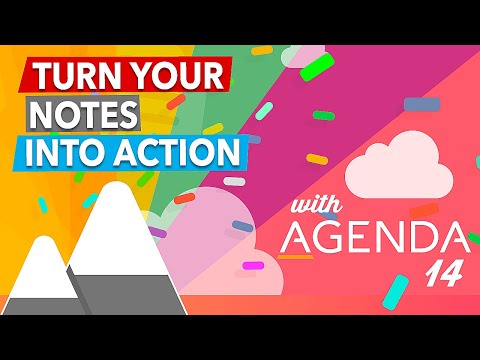 Note that if you click and hold the clock-icon you can have more control over what “recent” means when pressing it: 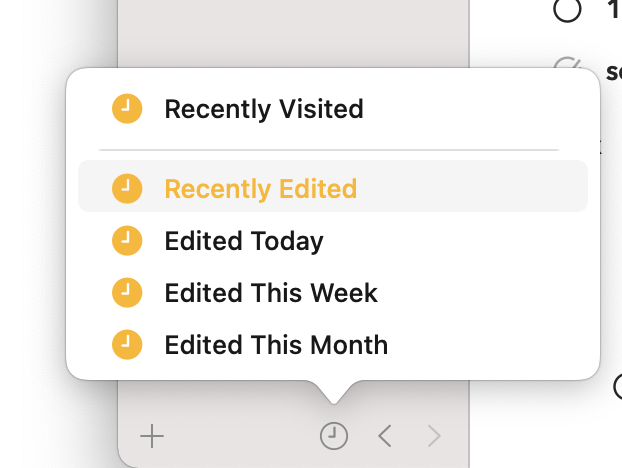 But perhaps isn’t a simple solution then to make an “Archive” category below which you move all these (in sub-categories and sub-sub categories if needed,

Yes, it would be simpler. I shall implement that idea.

Note that if you click and hold the clock-icon you can have more control over what “recent” means when pressing it:

That wouldn’t work for me at the moment, given my organisation. I would need to change my approach to using dates on notes, but I’ll mull that over. Thanks.