One item that I find valuable in digital notetaking is the ability to record audio notes that ‘sync’ natively to app based on the digital notes being taken. One such app that does this well is notability on the iOS platform. It can record audio and sync with your text and drawings where upon playback, the text and ink is slightly grayed or more transparent until the audio timeline matches the text/ink timeline.

Thanks for the feedback! We’ll consider this in future.

I’ve used Notability for years and this is the ONLY feature that stops me from switching to Agenda.

I completely agree with the other comments. I am a photographer and want to be able to record audio notes while out shooting but have these integrated into my note/diary app. I have downloaded Agenda and like the look of it but am reluctant to commit to switching from another app i.e. Dyrii, until I know that it does all that I need - because this is a big commitment. The ability to add attachments is also mission critical for me. If Agenda can deliver this then I will switch and upgrade to premium immediately. A bonus would be if - like Dyrii -the app also had the (optional) ability to automatically add location data to notes.

We are working on attachments now. Once we have that in, we can think about audio recording, drawing, etc. These aspects depend on the attachment support.

Hi Drew! Just wondering if there was any further thought into a this type of feature ever being implemented within Agenda. It’s super helpful for keeping up with the conversation as you take notes.

Thought, certainly. We have definitely considered it, and it would be great. For now, it is not at the top of the list though. There are just too many other features that affect a wider audience. But maybe down the track…

Thanks for the feedback!

Audio recording is the only reason I’m not using Agenda. I attend many meetings during the day and don’t like writing all the time. I prefer to pay attention and interact with others. I bought the Agenda and I like it, but I’m still stuck with Noted, Notability … just because of this feature.

Thanks for the feedback. Would be a nice feature.

Perhaps you can explain a little how you use this feature in other apps. Are you just after a record button on each note, which generates an audio file when you stop, and inserts it in the note?

Sorry for the extremely late reply. Yes, it would allow you to record, has a special ‘audio file’ that you can export if you want but if played back in the app, it can also match up (time) with what you’re typing on the screen.

Perhaps you can explain a little how you use this feature in other apps. Are you just after a record button on each note, which generates an audio file when you stop, and inserts it in the note?

Personally I would love this feature as well. One app that uses this in a way that i like is in the app “Noted”

In the app, you can click a record button, and it will record audio. Alongside this, it adds in a little marker of each paragraph for the time in the audio, and you can click on it after your done with your noteand listeing back on it to jump there.

This allows you to add further crutial detail to your notes after the fact, and is a huge feature for me. The only reason I don’t just use noted though, is agendas organization and other features, which I love.

For general audio notes, a simple thing you can do is record in another app, and use the “Export->Copy” share sheet, and then paste into Agenda as an attachment. I do this with Voice Memos all the time, and it works with a bunch of other audio apps I’ve tried.

I haven’t used Notability, but if it allows you to export its audio-synced-to-notes (maybe as video?) then you can do the same thing.

It is really cool, and for me at least has removed the need for Agenda to do lots of things. Other apps can already do those things really well, and I can paste the results into Agenda.

Alongside this, it adds in a little marker of each paragraph for the time in the audio, and you can click on it after your done with your noteand listeing back on it to jump there. 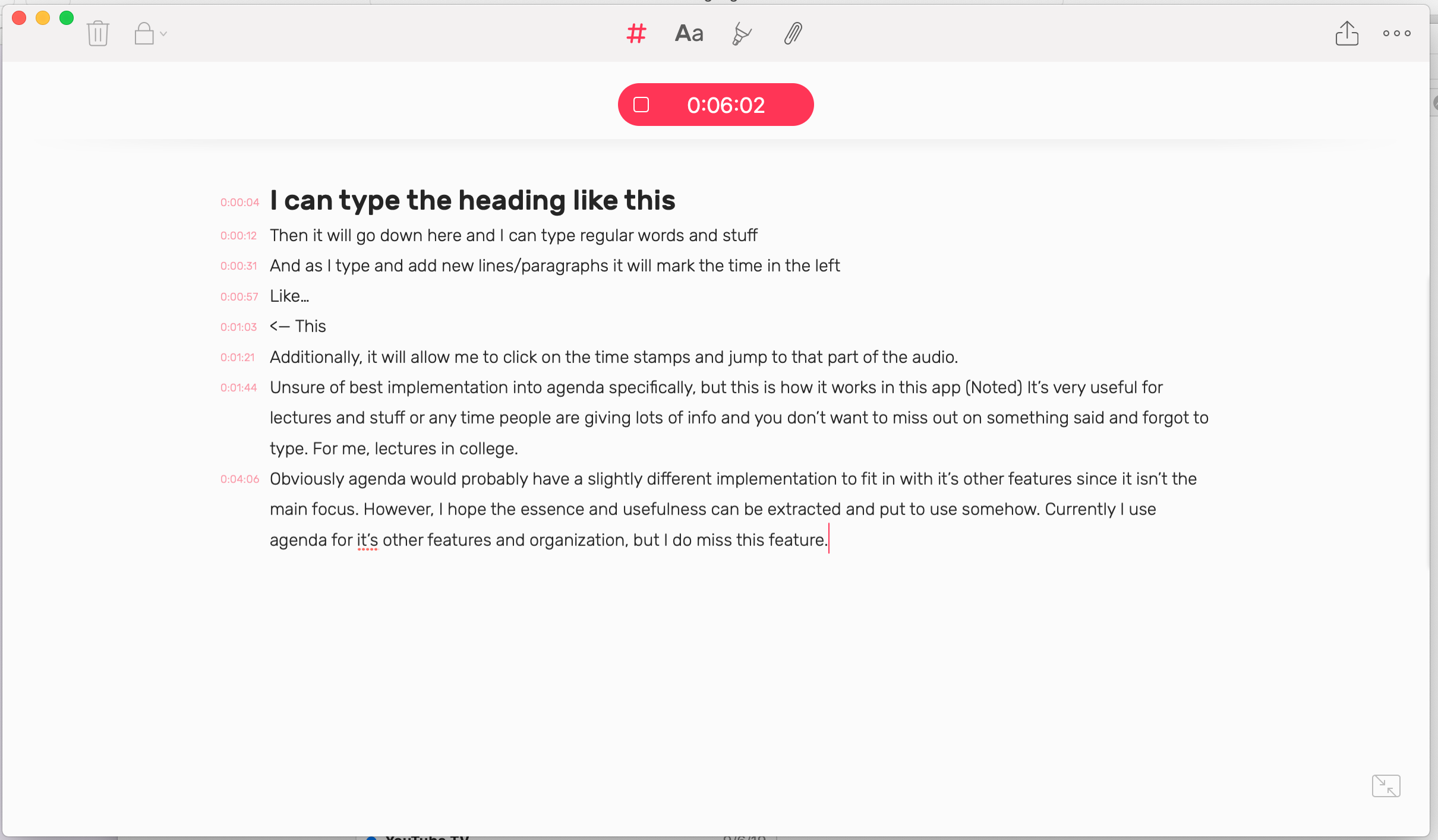 Text on the image has a bit more explanation but I hope this works?

Basically, each paragraph or time enter/return key is pressed it adds a marker. When not recording or using the feature, the marker is omitted and just displays text.

That’s very helpful, thanks, indeed the images makes it totally clear. I’m not sure it makes sense for Agenda to replicate this type of UI, but I can see where you’re coming from.

Reasons I have Agenda Premium: Calendar, Notes, and Reminders integration on Mac and iPhone. This is incredible.

Reasons I use other apps: In-app recording (which is why I’m posting in this thread), widgets, notifications (on the phone). To name a few.

I’m a fan because it is helping the general flow of work. Pivoting from the computer to the cellphone gives the user much freedom to move from deep work to shallow work when needed.

As it regards Agenda’s current limitations, I was just at rehearsal and wanted to take a few recordings of the music to practice with. Having just purchased premium days ago, I was convinced there would be a way to record audio on my phone within an organized and deliberate template I made here to keep abreast of the work. Alas, there was none, so I had to use Evernote.

As far as note-taking goes, Evernote is my backup app. Its a bit more sophisticated, which isn’t a deal-breaker for Agenda, but on this front, was irreplaceable.

Best of luck to you guys and gals toiling to give us the best apps possible!

Thanks for the feedback. This is very much on our roadmap. For now, you could consider using Apple’s built in Voice Recorder, and move the files as attachments later to Agenda. Not ideal, but a stopgap until we add a record function.

Considering the number of people who use Agenda to take notes during meetings, something similar to Noted might make a lot of sense. Imagine a note for a meeting, attached to a calendar event, with an audio recording, indexed like in Riley’s picture. That would be extremely useful.

I very much want this feature too!