Using the hash character without creating a tag

Is there an easier way to use the comment/hash character without it generating tags?

If I open a new note and paste:
#One
#Two

Then it turns them to tags, if I change it to preformatted then they are still tags, I have to manually change them all.

The only workable way so far seems to be:

Which is a bit of a pain, especially when I forget. There must be a better way?

I can add tags via the pop-up, ideally I would be able to turn off the automatic ‘#’ effect.

A quick shortcut to turning on the preformatted style is to type three quotes ``` in a row, then paste the content.

I’m doing something wrong!
I create a new note, tab to leave the title empty, type
```
paste in
Test
#One
#Two

and the output I get is in the image.
The first line looks to be indented and set as preformatted, nothing else is and the tags are still there. 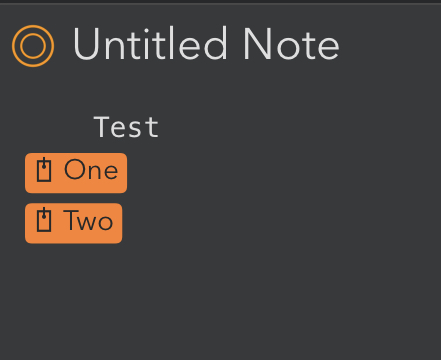 Presumably that would mean I have to add those to every line, is there really no better way?

The preformatted style is indented a bit, which explains the indentation.

The backticks is just a shortcut to “turn on” the formatting. I don’t know how exactly you create that text, but if you type the backticks, then a space, then Test, then return and add the tags, it should all be in preformatted style.

The backticks have to be on the same line as the start of the preformatted text.

My solution was create a note, add a blank line, change it to pre-formatted, paste in the text. Which is far less messing about than altering the original text.

I typed 3 backticks then pasted the text, that just did the first line as shown in the screenshot.

What I should have done was type 3 backticks and then a space which activates the style and then paste the text. I missed the space.

That is better, but I would still like to be able to turn it off, I don’t use tags at the moment and the hash character is more use to me.

Is it possible to use the ‘#’ character in body text without it getting messed about with?

I want to wite something that includes #14, I don’t want it preformatted or any other style, just want to be able to use the hash character.

It would be fantastic if it was configurable whether Agenda converted hashes to tags by default or not. I never use Agenda tags, but I often use hashes, and so I always need to escape them by doing something like #this.

It would be unlikely to add a setting to turn this off altogether, because then you can get all sorts of strange effects if one device has it on and another off, or someone sends you a note with hashes. We would rather give a way to turn off the special meaning for a particular character, like you do with the inline text, but without actually changing the appearance.

Thanks for the feedback!

oops, replied via email, forgot it would mess with it.

Sheesh, what with all the spell checkers and myriad different formatting systems it’s almost impossible to type anything any more!

Yes, that would indeed be the way to go

Is that really what you want though? I assume you would rather just see the hash, with not other characters around.

What I would be inclined to do is to allow the backslash as a way to say “escape this character”, but then Agenda marks the character as escaped and doesn’t use it for markdown. So the character would appear like other text, but be ignored for the markdown.

This I think would be much nicer than keeping the slash symbol in there. But maybe that is what you meant anyway.

That is indeed what I meant, sorry.

The "\" character would effectively escape the following character as in C and other languages. So two backslashes would be changed to display just the one backslash, typing a backslash followed by a hash would show just a hash character overriding the default expansion.

That way we can quickly and easily type something that needs a special character, it’s just a bit simpler and easier to remember.

Markdown etc are great but they can catch you out if you aren’t used to them (I’m not), so in the previous reply I did it by email, I suggested typing "\#" to get "#", but of course it displayed as "#=#" which is true but nonsense.

(Loving Agenda, I bought the Premium and haven’t regretted it for a second. One of the best apps out there, coupled with Gladys they are my two favourites and both work across all the Apple devices).

Perfect, then we’re on the same page, we hope to allow this in the not too distant future.

(Loving Agenda, I bought the Premium and haven’t regretted it for a second. One of the best apps out there, coupled with Gladys they are my two favourites and both work across all the Apple devices).

Brilliant to hear, thank you so much!

Any update on this, I just needed to paste a # in and can’t for the life of me remember how.

I’d rather not spend half an hour every time I need to type the hash character just trying to remember how on earth to do it.

So far I have never had cause to use tags but have wanted to use the # character many times.

To type a single # character you do:

So much easier than just letting me type the # character.

Can’t think how I didn’t remember it.

Sorry it is frustrating you. The trick is indeed to use fixed width formatting for the hash tag. You can use the back ticks you mention to do that, or you can use the fixed width style available via the menus on Mac, and via the keyboard bar on iOS.

The reason we chose #tag to be a tag is that it is a very common pattern. Most note taking apps that support tags use this approach (eg Bear).

I understand that it is not something you are used to, but every user is different, and many are used to this convention. And many other users don’t use # other than for tags. (BTW type a # in a note here in the community, and note that you get a tag autocompletion. This community is standard software that we didn’t write, so it is a very widespread convention.)

In future. we would like to bring in a more systematic approach to “escaping” special meaning. That will help with using # where you don’t want a tag.

Note also that putting a space after the # will work in preventing a tag.

It would be sooo much simpler if you used ## to preface a Tag, and leave # alone to be used as everyone expects.

Currently when I want a # I type ## and just know it means #.
But it would be infinitely easier and more intuitive if the two were reversed.

Be a leader - start using this simple protocol and let the rest of the industry follow you!!!

The syntax we use is a de facto standard for tags, so it would be very odd if we used something else. People expect tags to begin with a hash.

Another simple solution would be to have the string #text operate as a Tag, and # text operate normally.

This one could number paragraphs or processes as # 1, # 2, etc, and #text as a normal Tag.

Thus typing #2 would display as #2 but not function as a Tag.

Hopes this gives you some ideas. It is a lot simpler than some of the work arounds I have seen discussed.