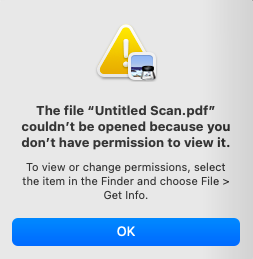 Things that might be helpful to know (Agenda version, OS and model, etc):

Oh, odd. Do you know when you added the scan? Was it an old one or recent?

Do you remember the steps you took to add it to the note? (I assume it was from that device, right?)

The Preview works on the scans on Mac.

I can open the scans on my iphone.

And the scans are really PDF files? Did you markup at all, or were they pure PDF scans?

Does this happen every time, or just sometimes?

Does it matter if you wait a few minutes before trying to open on the Mac?

Yes, all pdf scans, with no markup.

I’ve restarted both my Mac and iPhone before further testing, but the same problem.

I only stated making scans in the last few weeks. I’ve found one scan that does open, but I can’t see what’s different about it. The rest don’t open.

Also, I’ve now discoverd that when I drag them to emails as attachments, they are added to the email, but when I go to my sent emails, and try to open the attachments, I get the same error message. (I’ve not heard from any recipients that they can’t open them)

I have now experimented with scanning (on iPhone) into a note that already exists on the Mac, a newly created note on the iPhone, typing into the note before and also after making a scan, no typing at all. I still get the same error.

I also found the same scan by searching on a word that is in the scan, but not in the name I gave the scan. It seems the scans have been OCR’ed.

Here’s the location of the scan if that helps:

OK, this is getting weirder. It seems to be a Mac problem, not an Agenda problem:

When I navigate to pdf document on the web in Safari, and right click to open the pdf directly from the browser window, I get the same error message. But if I download the pdf to my downloads folder, I can open it with no problem.

Good news for the Agenda team, but I’m stumped!

Hopefully will be fixed in an update.

Thanks for letting us know and investigating so thoroughly. We’ll hold off a bit on investigating, as it does seem to be a. system problem.