Hi, Agenda dev,
It’s always a nightmare for me trying to expand or collapse a note in Agenda app, especailly the mac version.
On Agenda (macOS), you double-click the title panel to expand/collapse a note. But there’re two problems when you do: 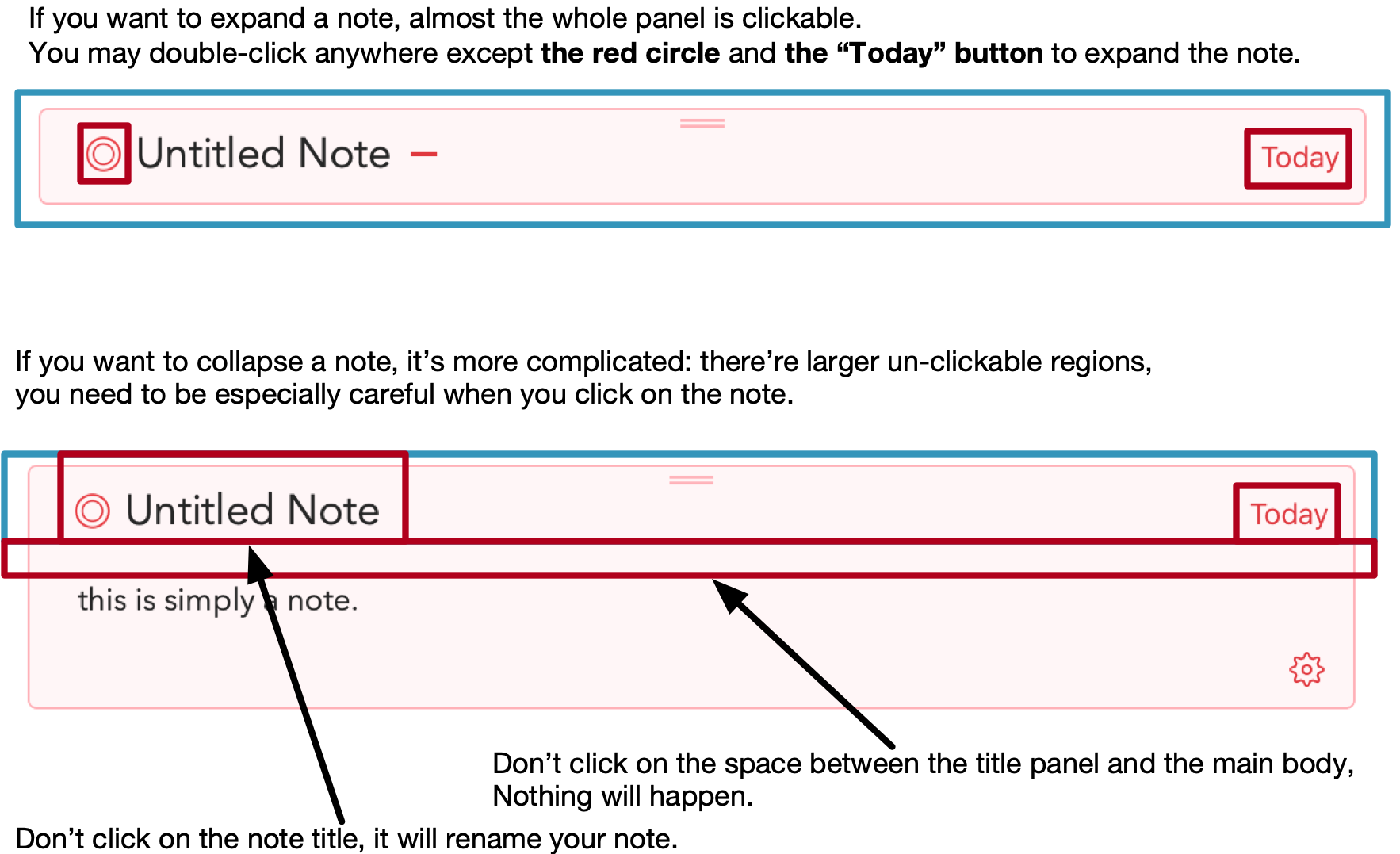 We have some changes in the queue to indeed improve this aspect. Thanks for the feedback.

Btw, one simple alternative that probably makes sense for you since you seem to use expand/collapse a lot is to simply use the keyboard shortcuts:

Very glad to hear that and thanks for your kind help!

Is it possible to do the same expand/collapse overlay as done with categories and subcategories? Maybe make the note title editable only when expanded?

We will address this in a future update, probably too early now to go into the specifics.

I would also like you to make some changes in this operation. I dislike the way it works today.

To start, and always speaking on an iPad, when a note is expanded there is no way of knowing that it can be collapsed. This is traditionally represented in UI with a small black triangle that swings from “point to right” to “point down”. But it does not exist in Agenda today.

On the other hand, when the note is collapsed, a “-” sign appears out of nowhere, which also doesn’t have much meaning since it doesn’t seem to represent an action: “if I click on - then it expands”

Additionally, the “-“ sign does not always appear in the same place, causing an “unattractive” disorder. The position depends on the length of the title … I don’t think it’s the best decision.

Finally, regardless of whether there is a triangle, a “+” sign, or a “-“ sign, you never double tap on an iPad, it’s not common and it’s a lightly difficult to do it… Why did you choose this action to expand and collapse?

(I think there is someone on the development team who is not going to like my suggestion, sorry

The reason we don’t put another icon/button there is simply that it starts to become really cluttered with controls. We aim to keep the app as visually uncluttered as we can, and even button is another distraction.

We have some changes coming for the title layout on iOS. Maybe that will help.

Not also that we allow pinching in/out on the note to collapse and expand. And you can also use the cog button at the bottom. So there are other options.

I understand your reasons based on the principles of minimalism, seriously. But the principles related to the UI, sometimes, must be respected: the “-” signus is not the best icon for “expand”.

Also, pinching out is not practical for expanding; although pinching in is a valid option itself.

I think it is possible to make a more userfriendly GUI and keeping it „simple“ and not too cluttered at the same time.
For me, if the signs tell the user what they stand for and they are well designed and located, then it is ok to have 2, 3 icons.
Concering the „-„: In my opinion such „buttons“ should always stay visible and work like on/off buttons. Like in Finder a window (list view) with folders and files - the small triangle is used to „open“ a folder and to close it.

I don’t think it is really the same as Finder. In finder, the whole purpose of the outline view is collapsing, and it makes sense to have a large triangular control. For Agenda, collapsing is more a pro feature. It is fine if you don’t even know about it in the beginning. You can use the app fine. So I wouldn’t want a big triangular control there distracting from what is really important.

That said, I’m sure there are plenty of middle grounds, like showing a control when selected or moused over. We’ll think about it.