Exiting Things 3 and going all in with Agenda

I use Things and Agenda together — nothing falls through the cracks that way, and they do play nice.

‎Sorted³ has been featured by Apple as [App Of The Day], [New Apps We Love] & [Great Apps for Apple Watch] numerous times. It has been completely rebuilt from the ground up to make scheduling your day even easier while being more powerful. ● Why...

Most underrated task management app in the App Store, by far: Sorted 3.

Sorted looks pretty awesome just from the AppStore videos. Has anyone used BOTH Agenda and Sorted? Can anyone give some details about how they use each? Pros and cons of each?

The main benefit from Sorted is that you can adjust task duration for a single task, on the spot, and all future tasks for the same day will get deferred accordingly, letting you know when free time will be available more accurately.

But there are many, many more benefits from using Sorted. Here are the guides the developer published on Medium:

This is where you’ll find the list of articles in Sorted³ productivity guides.

As for Agenda, your life is not a series of incongruous moments. It is a bookmarked evolution on how your thinking progresses throughout time. Enter Agenda.

Thanks for the info! I really can’t imagine NOT using Agenda now

And I’m out! I noticed what I thought was an intermittent problem with random Agenda links not working but couldn’t figure out what as going on. Super frustrating when I’m trying to reference back to a previous note, but the pretty blue text link just stares back at me dumbly after I click it. Turns out it’s a known issue that the team has been working on for over a year now!

I’m sorry, but this turns out to be a deal breaker for me. I set my projects up in the GTD method, so I’m constantly moving notes from Inbox to Actionable to Waiting to Archive. That I can’t link back to a historical note after I archive it seem a critical flaw.

Now that I’ve acclimated to the Agenda environment (and transitioned nearly two months of my workflow), I can’t go back to Things 3.0 exclusively. I’ve see a lot of people talking about Bear, so maybe I’ll give that a shot for my notes while going back to Things for my tasks.

I’m sorry to be so negative all of a sudden on Agenda, and for all of you happy users out there, I hope you continue to enjoy. I’m just personally having a hard time with this most recent development because of how enthusiastic I was for Agenda.

Oh well…happy note taking to everyone!

Sorry to hear that. The work to ensure links will no longer break when moving notes between projects (which is the only situation under which this can currently happen) has been done, it will be part of Agenda 9.0 (the update following the one currently in review).

It’s okay. You guys are really passionate about this product and philosophy, which I respect. It really is a great concept, and I know the team is constantly working on upgrades/fixes. There really isn’t anything like this, and I will likely continue using the app for managing personal notes where I don’t have to link between notes nearly as much as I have to do for work.

It is great to hear about the link fix coming in version 9.0, and I look forward to its release.

That’s really kind of you to say, thank you!

Three ways to do this:

By the way, in RE option 3, I tweeted to Bear Notes this a while back:

@BearNotesApp If "binder" sounds too mundane for you guys, then here are some similar terms: - Stack - Portfolio - Collection - Group(ing) - Selection Anyways, I really hope this comes to happen sooner than later. Cheers.

I’m not subscribed to Bear cuz Agenda and it’s community rocks; it’s not even installed on my devices, but I’m happy for them and their users they are now ensuring links with so-called “Live Notes”. 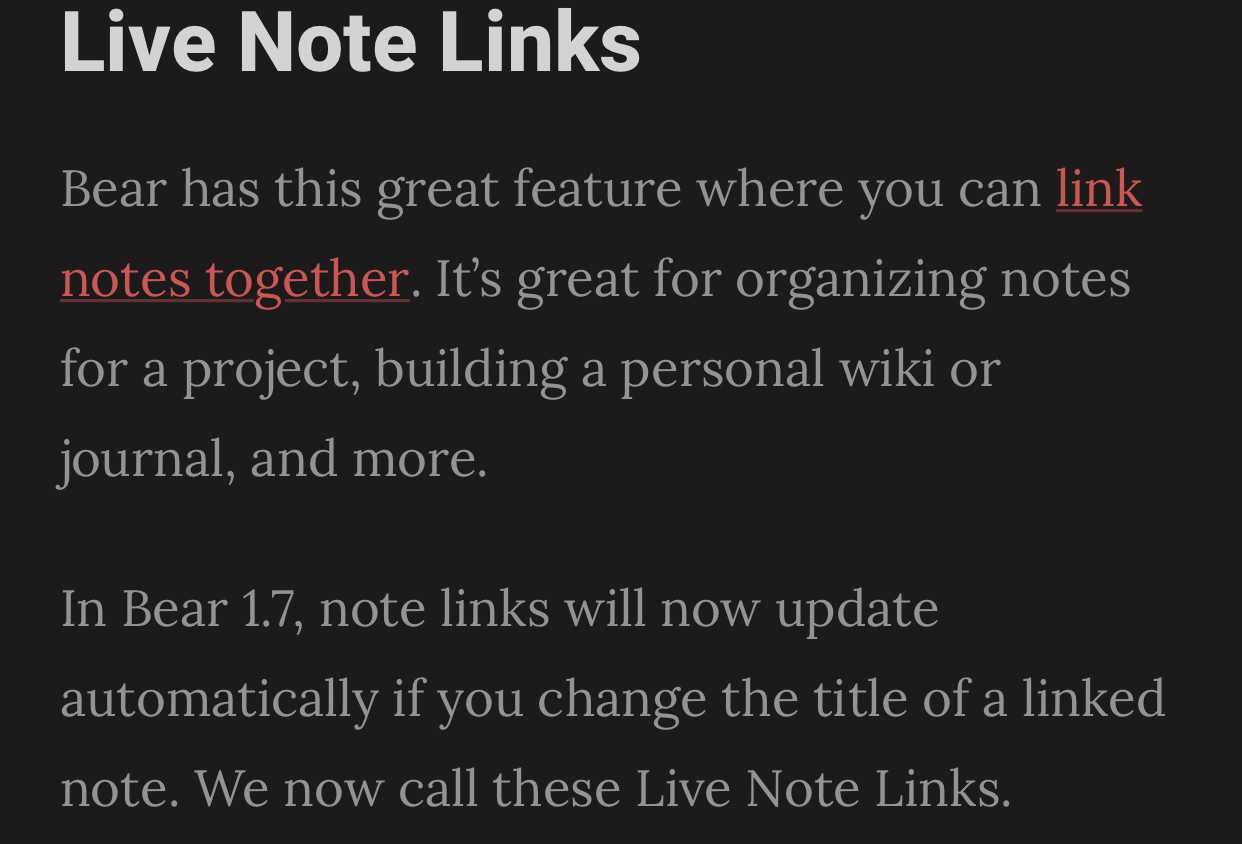 It will be the first:

Please do note that we don’t do the live notes that Bear advertises, i.e. if you change the project name it won’t update the actual text of the Agenda link in notes that point to it. We feel that while sometimes this can be desired, sometimes it’s not (for example if you changed the text of the link to something else), and therefore prefer to keep the old name.

I also use Things 3. This is my system after trying a lot of apps.

I honestly like the agenda and sorted^3 combo using reminders as the go between. Has been great for me. I don’t know if any one else has used this combo.

I’m reluctant to try another app, but… “do this thing on this day” has been my single biggest frustration with OmniFocus for years. So, I’m interested.

How do you “use reminders as to go between”?

FYI I did try Sorted and have been really enjoying it. It quickly displaced OmniFocus on my iPhone quick-launch bar, which was a big surprise to me. I’ve been using OmniFocus for many, many years.

I don’t find Reminders particularly effective as a go-between at this point yet… Agenda requires a date & time on reminders, which I don’t really know until I actually schedule it. And Sorted marks reminders as complete when they’re imported, which marks them as complete in Agenda.

It’ll take a bit of time to find a good balance / interaction between Agenda and Sorted. But I’m finding Sorted really effective at actually scheduling the things I want to do, while still remaining flexible. At this point, Agenda is working really well for high-level strategic planning, and Sorted for tactical planning.

Agenda requires a date & time on reminders, which I don’t really know until I actually schedule it.

And I’m out! I noticed what I thought was an intermittent problem with random Agenda links not working but couldn’t figure out what as going on. Super frustrating when I’m trying to reference back to a previous note, but the pretty blue text link just stares back at me dumbly after I click it. Turns out it’s a known issue that the team has been working on for over a year now !

I’m out too. I really loved Agenda at first, but the bugs are just stupifying at this point. At random intervals, I will be typing in the middle of a note and then find my cursor will jump unexpectedly to the end of the note as I’m typing which of course mangles whatever it was and breaks my focus to boot. I duly reported that bug, of course, but was told "I’ve seen this a few times myself, but it is difficult to track down…” So, in other words, it’s a known issue but they don’t know how to fix it. That’s pretty disappointing and doesn’t inspire confidence.

That’s on top of issues like corrupted undo/redo behavior (which is I think better now but was an issue for a long time), and weird display glitches. For example, a couple days ago as I was navigating my projects the entire window of Agenda started disappearing, blinking in and out of existence as I clicked, over and over. I reported that too, and was told that it’s a known issue. And sure, it went away after I quit and reopened Agenda, but… come on. That’s absurd.

Sorry, but I paid for Agenda. Two years running. I loved the features and the concept. But the more I use it, the more I get the feeling that I’m paying for the privilege of beta testing or doing QA. Every time my focus gets broken by some stupid thing like my cursor jumping around, that’s a loss of time, a loss of my attention, and ultimately a loss of my trust in this tool.

I use lots of indie software (Things, MindNode, Ulysses among others) and sure, they all have their share of bugs. But only with Agenda do I get the feeling that underneath the surface, the whole thing is held together with scotch tape and paperclips. “But” the developers plead, “none of those apps are doing what Agenda is doing! This is hard.” And to that I say: figure it out. Good luck.

@d_chadwick … I think you are too pessimistic on Agenda, which have bugs but even great advantages in term of organising the workflow. Sometimes I have the same problem of the jumping the cursor but I believe that it will be fix in the future.

Well, hard words but not entirely untrue. I’m pissed by the edit behaviour sometimes too. But I will not give up hope.