What I did: I’ve recently returned to Agenda after returning to Mac OS. Are there any tips and tricks for navigating long notes? Sometimes my notes can be really long because I include screenshots and using the slider isn’t always convenient. By navigating I mean, while the note is being created, to be able to jump to various sections within the note.

What I expected: Some examples that come to mind include being able to jump to various headings within a note, or even utilizing jumping to tags.

Things that might be helpful to know (Agenda version, OS and model, etc):

I would be interested to hear what people think about this too. When I saw on macOS what looked like a place to click for collapsible headings I was excited, but saw it brings up the format/action picker. That’s not a bad thing, just made me think it would be nice to navigate collapsible headings.

I like the table of contents for this, but it’s hard to organize depending how you use filtering or title your notes in a project.

One approach, which works for me, is to use more, smaller projects, and more, shorter notes.

I used to think of projects as like a folder in finder, but now I think of them as an actual project that has a start and an end. I often think of notes as being sections of a document, rather than a long document.

This not only means I can navigate to different sections (by clicking in the project name at the top, or in recent notes), but I can also use OTA and completed to show the status of each note/section.

I agree - having collapsible headings would be one solution.

One approach, which works for me, is to use more, smaller projects, and more, shorter notes.

In general this is the best advice as Agenda isn’t really designed to work with very long notes, if you make them really long you can even hit performance issues. Depending on your setting it can for instance make sense to “up a level” in terms of hierarchy, where the note becomes a project and the project becomes a (sub)category.

As an example, I’m keeping track of Agenda’s releases and plans in Agenda (talking about “meta”). I could have one project “Agenda Development”, where I make one note for each version of Agenda. Each note could then have “features”, “bug fixes” subheadings etc. However this would get you in the kind of situation you find yourself in, those notes would get very long and indeed it would get annoying to quickly jump to say “bug fixes for version 12”. You then also start to long for collapsible sections, more in-note navigation etc etc

Instead I’m using the following setup:

This setup has a bunch of advantages: 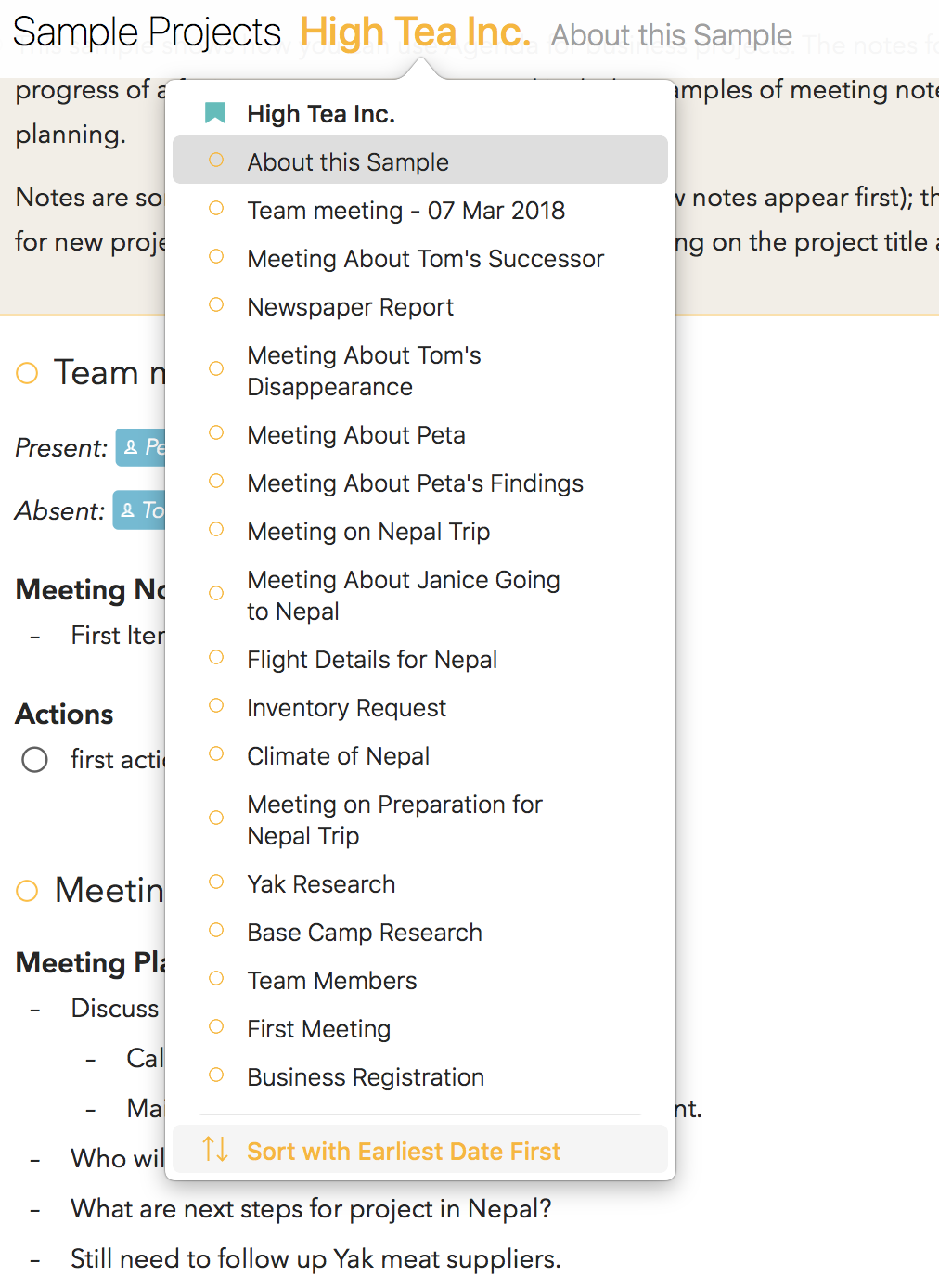 Of course it works especially well for notes that have some kind of recurrence to them (in our case we always have a next version after one is done). If that’s not the case, a middle ground would be to split a note in multiple notes. For example using the above example, split a note “Version 12” into “Version 12 - Features” and “Version 12 - Bug fixes”, etc.

In conclusion, when you find yourself looking for ways to navigate inside notes, or wanting to hide parts of a notes, it’s a good indicator that you might want to either split a note in multiple notes, or turn a note into a project.

Interesting, and I love the additional clarification. I need to expand my thinking as sub-categories are now supported. I haven’t played around with archiving as yet as I’m waiting for the ability to archive categories to be released.

What is the definition of too long re: potential performance issues? Is there a post that shares best practices w.r.t. performance?

My pages have a few screenshots of presentation slides I captured during a webinar, so it’s long in terms of the pictures are taking up space within the note, vs. the file size being extraordinaryly large.

What is the definition of too long re: potential performance issues? Is there a post that shares best practices w.r.t. performance?

There’s no single rule I’m afraid, it depends a bit on how many attachments, tags etc you also use in your text. But as a rule of thumb and as mentioned, once you start longing for in-note collapsing/searching etc, you are probably stretching it and should start thinking of splitting the note in multiple notes or even making it a project. On the flip side, if you have over 100 notes in a project you are better to split the project in multiple or make longer notes. Perhaps the best reference is what you see here in the forum, and in this thread, that’s kind of the notes you’re aiming for. At least a few paragraphs but probably not much longer than at most 2-3x my post above.

My pages have a few screenshots of presentation slides I captured during a webinar, so it’s long in terms of the pictures are taking up space within the note, vs. the file size being extraordinaryly large.

Right, if you add many full-width images per note you can currently also hit some performance bottlenecks. Good news is that we plan on addressing those in the major update after tomorrow’s version 12 update.

It dawned on me that I could just use Bear for my longer notes. It didn’t occur to me that I was (incorrectly) thinking of Agenda for the single source of truth for all notes, including reference notes that I’ll like to refer to from time to time. I’m not sure whether Bear has the same (performance) constraints, but I guess, another topic for me to research in the Let’s Talk thread.

Indeed having a workflow where different apps work together, using their own individual strengths, can make a lot of sense. For example, Drafts and Ulysses might be other apps you’d want to consider for longer pieces of writing (and I’m sure there are many other candidates). Things, Omnifocus, etc could be apps you’d use as task manager that work in tandem with Agenda. Plenty of options in that respect.