What I did: Created reminders in Agenda and assigned them to specific Reminder lists. 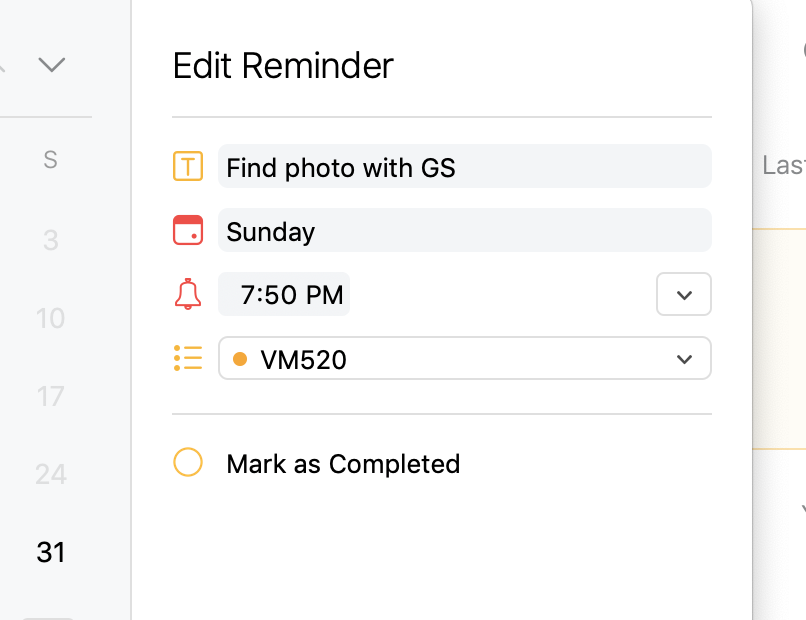 What happened: When I later opened a reminder in Agenda, such as to edit the time or mark it completed, the window then shows the reminder assigned to a different list. In the attached image, the reminder was originally assigned to a list called PersonalReminders, but Agenda is suggesting a different list. The drop down menu shows my reminder lists in the order in which I have them arranged in the Reminders app, and Agenda seems to be defaulting to the one at the top of the list. If I cancel out of the edit dialog, the reminder stays assigned to the original (correct) list, but if I edit it and save it, or mark it completed without manually reassigning it to the right list before clicking save, the item will then actually move to the new (incorrect) list in Reminders.

What I expected: that Agenda would show the reminder in the list to which it was originally assigned and not make an executive decision to reassign it to a different one.

Things that might be helpful to know (Agenda version, OS and model, etc): Agenda 6.01, MacOS 10.14.6. I think this only happens in the Mac version; it doesn’t seem to be an issue in iOS.