I’m thinking about using Agenda as above, and before I dive wondering if anyone else is doing this, and how their workflow goes.

I need to keep a list of things I’ve come across that I want to read when I have more time, and also, when I read them, keep track of useful stuff for future use.

Most of the time, it’s stuff that I think I may want to use in my work, blogs, social media, etc in the future. So, it tends to be fairly random.

Current tools: I was using Pocket but switched to Pinboard a few months ago. The main reason for the switch was to be able to tag items, automatically adding them to on RSS feed that my social media scheduling tool (SmarterQueue) can draw from.

Outputs: This is where it’s a mess. I collect stuff and read stuff, but unless something is really relevant right now, I don’t do anything much with it. I don’t take notes on it, because it’s not a priority and it means opening up another app copying the url etc, I don’t tag it by topic because generally it covers several issues; the social media RSS feed is clunky.

But then later I think “that thing I read…” and I have to scroll through Pocket/Pinboard to find it.

I realise this is as much about me and my habits as the tools! I’m thinking that if I shared stuff I want to read to Agenda, I would have a note for each item, and when I read it, I can easily copy and paste any quotes etc into the note.

Ideally I think a shortcut based on the sharing extension would help, eg adding the article title to the note title, copying any highlighted text and the url into the note.

When I need to work with the information later, I already have a note where I can add further thoughts, draft a Tweet etc.

Guess a good time to refer to the good old Spring cleaning topic:

Are you like me and do you recognize any or all of these? You subscribed to a dozen mailinglists or use the wonderful Mail to Self iOS extension and now have Mail showing a 4 digit number of unread messages that clutter your inbox, but you don’t want to throw them away because one day you will read that interesting article they mention or need that tip it features? Your web browser has a gazillion open tabs and hidden windows, slowing down your Mac, but you don’t want to close any of them …

And of course another thing that fits in the workflow is making use of the Sharing Extension.

One final suggestion is to make use of a “Scratchpad” project that can function as an “inbox” where you can quickly park some things before you later put it in the right place.

Perhaps a bit smug, but I’m pretty much on top spring cleaning! My problem isn’t so much quantity as quality - and finding the quality again! For example, I’ll skim read an article and decide that some useful ideas I will want to come back to. If I can easily get this into Agenda, I will already have a Note for the article when I have the time to read it. At the moment, when I later read it in Pocket (or Pinboard - horrible), I still have the friction of creating a new note and copying over the url etc. I’d like to get things straight into Agenda and avoid that extra step.

I know the Sharing Extension will be my friend, but I think I’d rather have one note per article than adding multiple articles to a list in a single note. It would be cool to have a short cut that used the sharing extention to create a new note and paste relevant items into title and body.

I know the Sharing Extension will be my friend, but I think I’d rather have one note per article than adding multiple articles to a list in a single note.

The sharing extension works great for this. Here are the steps for Safari on Mac:

One thing I noticed is that the + only appears if you select the project - so if you’ve previously selected or created a note using the share extension, you won’t see the + button. It’s an extra step, but if you navigate to the project again you’ll see it again. It is a bit confusing in that it seems like creating a new note isn’t available there. Perhaps @mekentosj will consider making the + visible in the dropdown list even if a note is already selected?

btw I have tried Pinboard multiple times over the last several years and just had lots of problems with it. Particularly around full-text search - often it just wouldn’t index things. I have been using Historious for the past couple months and really like it. It provides a google-like interface to your saved pages, caches pages like Pinboard does, and shows a relevant preview of the search results. So you might check it out.

I haven’t used Agenda as a reading list like you say, but I am definitely going to try it out now that you’ve brought it up!

One thing I noticed is that the + only appears if you select the project - so if you’ve previously selected or created a note using the share extension, you won’t see the + button.

Ah, this is indeed a bug, will fix that! Cheers!

Thanks Pat, that’s basically what I’ve been experimenting with.

Would it be possible to create a shortcut using the share extension to create a new note in a specific project and then paste text and insert the shared item?

Recently implemented this so not sure if it will fit well into your workflow. The idea is to create a keyboard shortcut to share to Agenda. I actually use this for saving articles to Pocket but recently added Agenda to it. 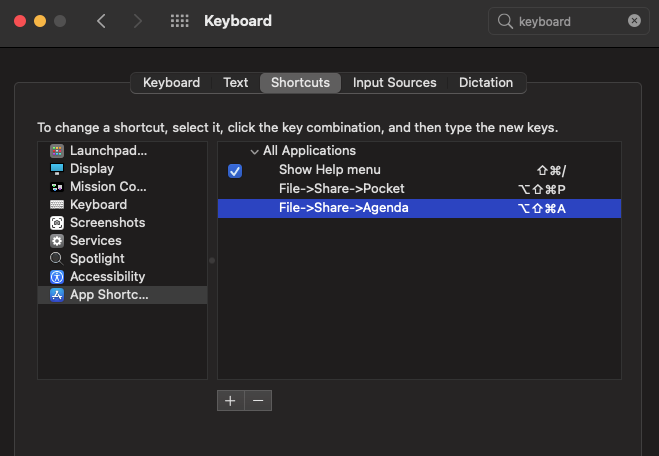 So when you’re reading an article and you want to save it to agenda, simply do the keyboard shortcut then the share extension will automatically popup. The default behavior, though, is to add to an existing note, not a new one. But with 2 clicks, you can create a new one then add your ideas in it.

I know I am taking it to the next level but… Any hope here to get something like what Evernote offers? I refer to the ability to share the whole article (or the simplified page, if not the full page) into Agenda as a new note. That way would allow to read and edit it directly in Agenda, cutting away what is not useful, underlining the key points, tagging as appropriate, adding reminders, linking to other notes…
Dreaming out loud?

I’ve not played with it, but I just noticed that the Templates functions include pasting the clipboard into the new note created from the template, and you can also insert the ’share’ link.

So, if you created a template for say ‘articles’ you could set up a short cut to create a new note from the template, insert the share link and paste the clipboard - obviously you’d need to select and copy the text of the article first, so not seamless.